Established in 1940, Manning International in Fairfield, CT is the oldest company in America that supplies Australian opal products. For more than 80 years, we have been providing superior gemstone products and services. Our company operates under the leadership of Jerry Manning.

Why Work With Us

We understand the overall process opal goes through: from mining the rough ore in the field until the finished product reaches the consumer. A member of the American Gem Trade Association, we take an active part in protecting the people who work in our industry. As such, we buy raw materials in the fields, and we directly transact with miners and rough stone dealers.

For more than two generations, we have been acquiring domestic cutting in America. We have extensive experience when it comes to gemstone cutting. 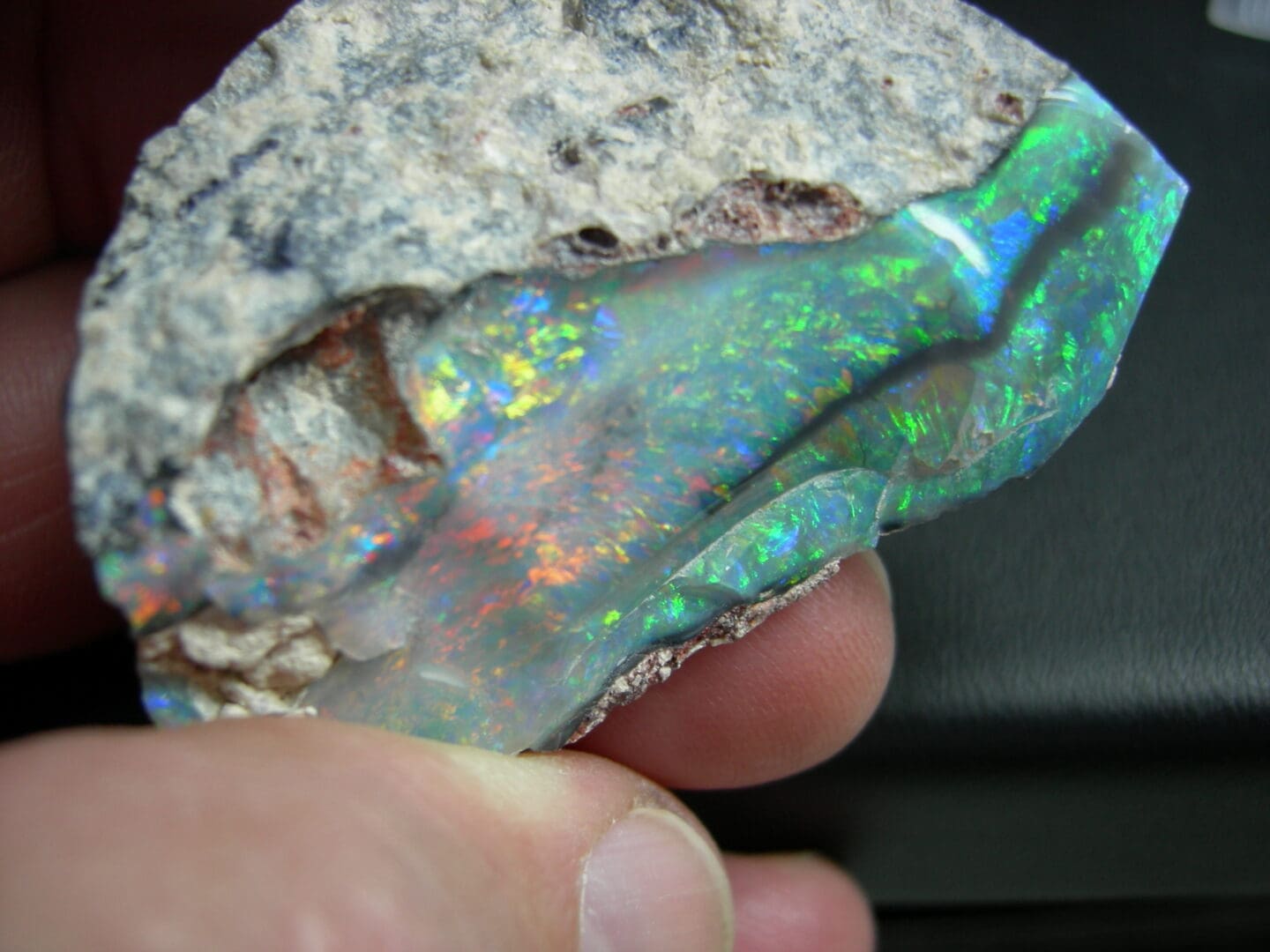 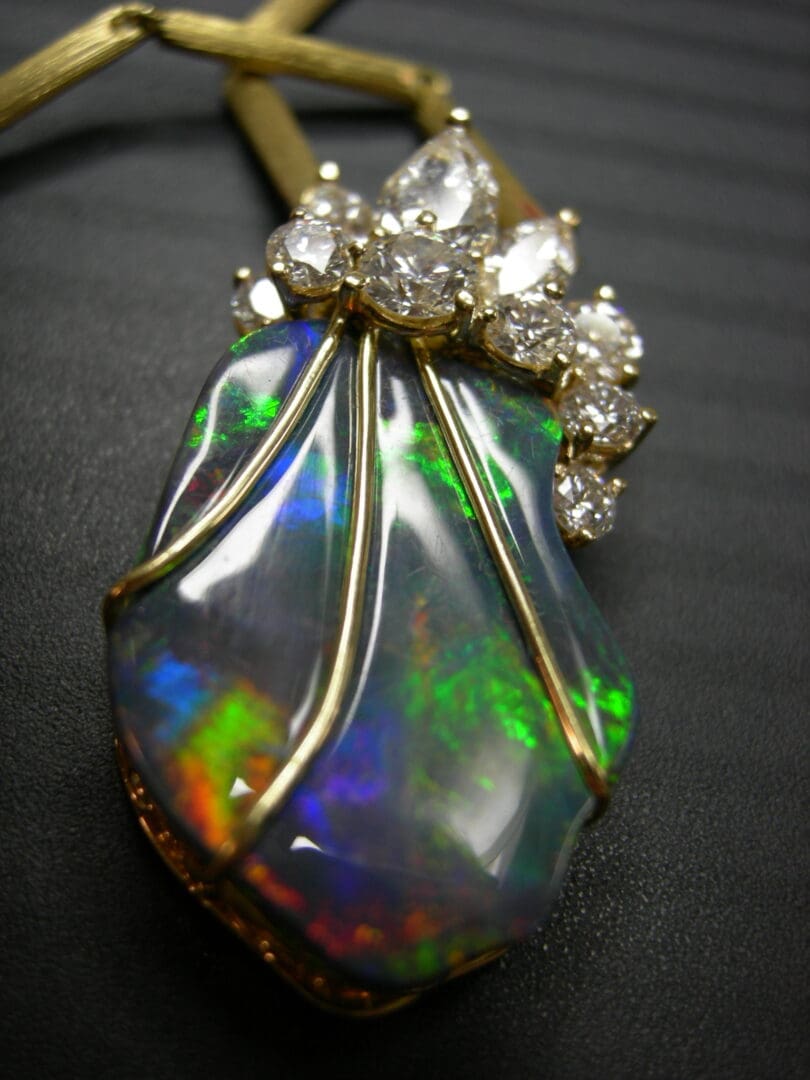 More than 80 years have passed since George T. Manning left Europe for Australia. His job as an international grain merchant was to develop a more robust trade between his European firm and the vast potential of Australia's agricultural community. As things go, Manning's assignment was scrapped, largely due to the looming threat of war brewing in Europe.

At that moment, in a pub in Sydney, the story of Manning's rise to dominance in the opal trade began. He was to become renowned as “The Opal King.” But this unofficial title, a sign of the respect with which the mining and dealing communities in Australia regarded him, didn’t come easily. 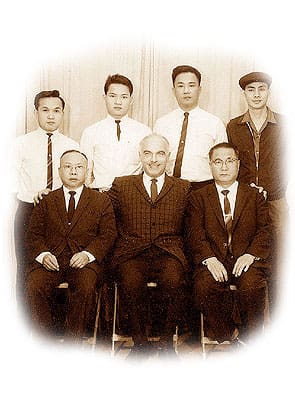 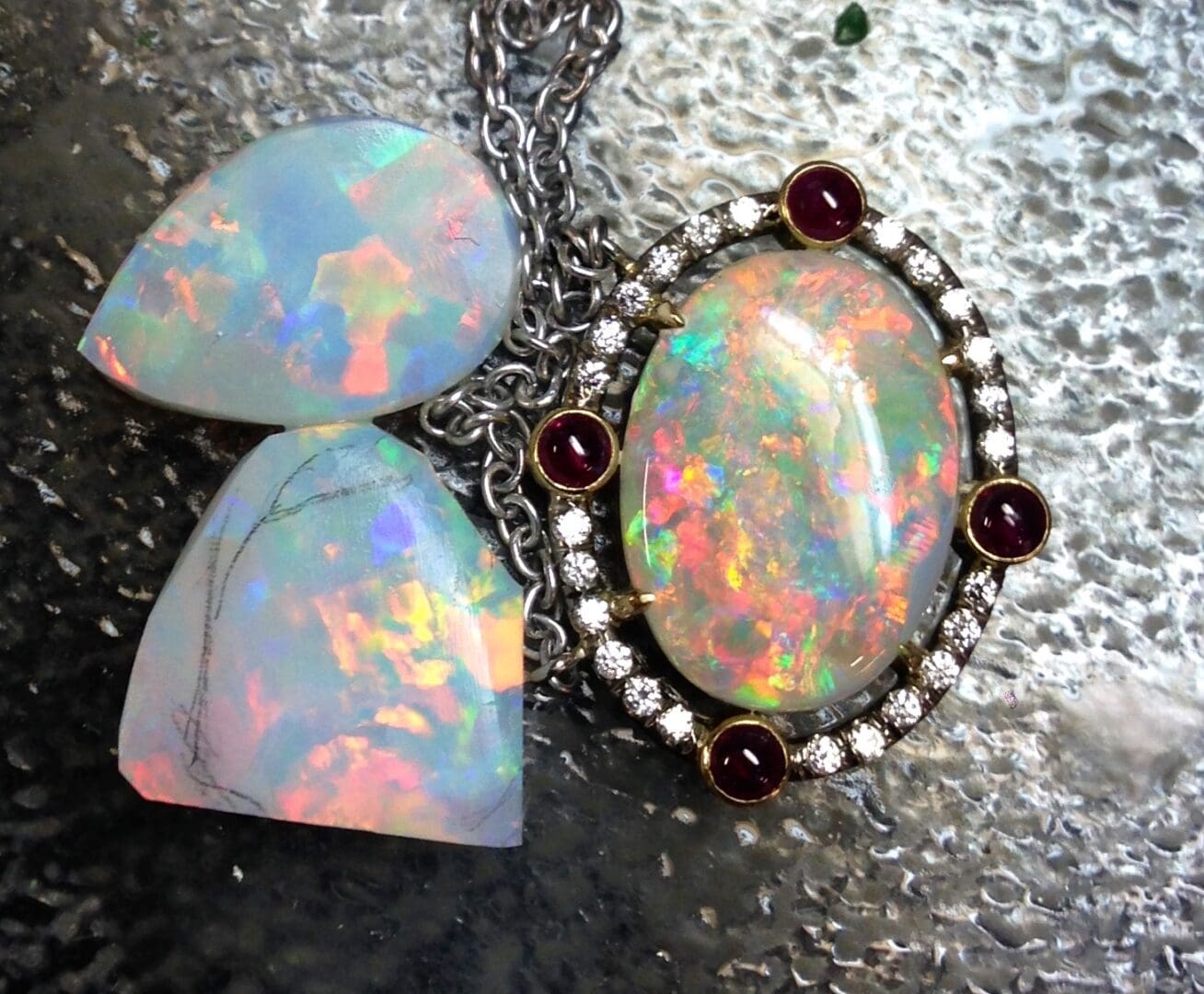 The Stigma Against Opal

In those early days, opal was still a relatively unknown commodity. Many false starts had come and gone to introduce this gemstone to European markets. Almost no trade had been established with the USA. Distances were so great, costs so high, and transport times far too long to permit practical trade. Also, there was the lingering superstition in European countries that opal might bring bad luck to the wearer.

This superstition took root from Sir Walter Scott’s depiction of opal’s mysterious radiance in his 1829 novel, " Anne of Geierstein,” or The Maiden of the Mist. Due to the novel’s vast European popularity, Scott’s description of opal as a mystical object led to the gem’s disfavor from the mid-19th century into the early 20th century. Dispelling the superstition became a hurdle opal had to overcome.

However, opal continued to grow in popularity with those who disregarded the unfounded belief that Scott’s novel had generated. In fact, it was Queen Victoria and Sarah Bernhardt, the first renowned trend-setting western famous personalities, who ignored the superstition and purchased Queensland opal for their collections.

Manning's plan was to immigrate to the US, but without a means of support, he knew this wasn’t possible. When he saw that first rough opal parcel, he asked many questions: How much was it? Where was it mined? Was there a steady supply? Who marketed it and where? How could one judge the rough in relation to the cut output?

Manning purchased this opal parcel and sold it in Sydney for a fair profit a few days later. He bought more and sold it quickly to the local Sydney cutters.

As his interest aroused, he met some old hands in the mining game which he had prospected in White Cliffs and Andamooka. Together they planned a trek to the fields, an introductory adventure that Manning treasured until the day he died.

His many years of field-buying in Andamooka, Coober Pedy, and Lightning Ridge never quite equaled that first flush of excitement during those early journeys over land from Sydney to the opal fields. The Outback, the rugged miner's life, the thrill of a new find, the process of cleaning and classing the rough and cutting and selling it to the market – fueled his decision to devote his life to promoting Australian opal as one of the world’s premier gemstones. 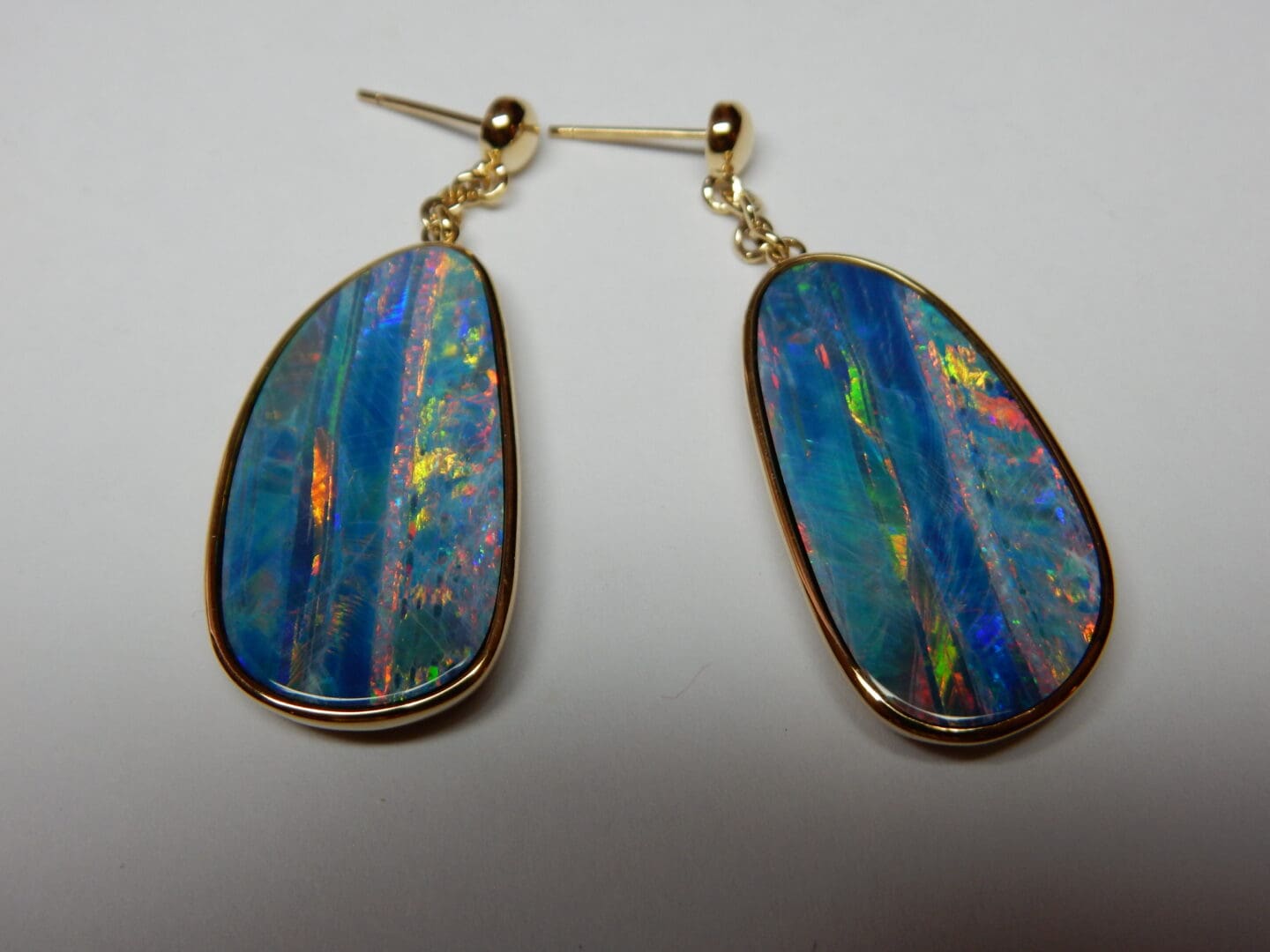 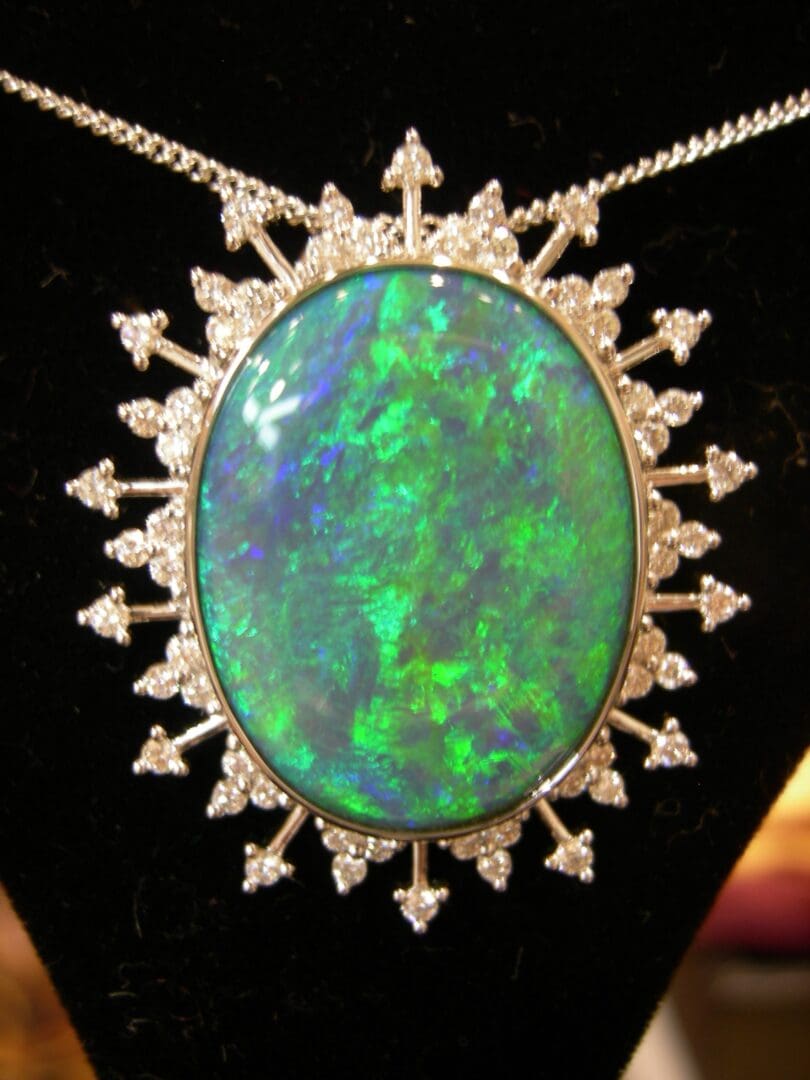 In 1940, Manning immigrated to the USA to start the business in New York City's then jewelry district in the Maiden Lane and Canal Street area. He went door-to-door, showing his stones, building interest, selling as he could. Because his stones were “free-sized,” there was a volume limit to the growth of the business. Unless he could find a way to sell volume, he knew he would be limiting the opportunity to increase sales.

A paradigm-shifting idea blossomed. Manning recognized that opal had great potential as a manufacturer’s volume item. No one had yet seriously considered calibrating this gem in high volume. Supply had always been limited, and quality had never been assured. Thus, he saw his opportunity.

Manning’s broker relationships with Australia’s Pogany family, and later the Collins and Keady organizations, allowed for a constant stream of rough opals to be sent wherever he required.

Manning had already completed the arduous task of categorizing opal, establishing color and quality grades, calculating yields, and selecting the sizes and shapes. These factors would become the opal standard for the industry. Now, the need to feed volume to the market became urgent.

The Search for Cost-Effective Cutting Labor

Manning's New York cutting operation couldn’t keep up with the demand for free-size and single stones and not for calibrated sizes. So, Manning began his search for a suitably skilled source to properly slice and cut his opal products.

His first efforts to develop a reliable volume-cutting operation took him to Idar-Oberstein. Cutters from this town had already become skilled in cutting and polishing opal, but not in calibrating it for volume markets.

Very soon, Germany became too costly a cutting environment for high-volume output. The post-war boom led to a significant rise in labor costs. Manning had to find another source of skilled labor if his plan was to succeed.

Once again, he traveled around the world in search of highly skilled and affordable labor markets to produce the volume cutting required by the American manufacturing industry’s demand for opal products. Hawaii, Samoa, Indonesia, Fiji, Philippines, and Thailand had potential, but none were suited to meet the requirement for precise, high-volume calibration cutting of opal.

After a series of disappointing starts and stops, George arrived in Hong Kong. It was that visit that spawned what has become the modern opal cutting industry today.

Manning found a willing audience in Mr. Ngai and Mr. Chan of Wan Kow Gems. These two men owned a tiger eye and jade cutting factory. They were fascinated by the unique beauty of the opal rough Manning brought them.

Manning sat at the slicer, demonstrating the skill necessary to clean the matrix from the gem material to reveal its optimum color. He showed them what variations were common and how to avoid cracks and imperfections. The dopping and finishing processes were much the same as the ones used with tiger eye. Thus, the skills of one could be adapted to the other.

For 10 years, Manning and Wan Kow dominated Hong Kong's opal industry. Transactions were routine and reliable. Direct rough opal shipments from the field, priced fairly with consistent quality, made this enterprise possible. As such, both businesses prospered.

These two men, Manning and Yamamoto, loomed large on the rough opal horizon for many years. With George T. Manning's passing on April 1977, we lost the original link to a business adventure that continues today.

Manning International is the successor company to Manning Opal Company, Inc. In addition, Wan Kow Gems has evolved many times over into the current population of fine cutting houses in Hong Kong and the People's Republic of China.

Marks, Lane, Bartram, Costello, Van Brugge, Keady, Christianos, Giles, Sherman, Cudlipp, King, and many others remain at the core of the Australian opal industry. Greek, Italian, German, and Slavic immigrants, along with more recent Chinese newcomers, populate the mining communities of the Outback in search of the magical amorphous silica gemstone that is the Australian Opal.

Until George T. Manning's entry into the opal world, no one had succeeded with such a vast market penetration and product development as he achieved in his 40 years at the helm of his opal business.

So, it is with great pride in his memory that Manning International and its parent, Manning Opal Company, Inc., recognizes George T. Manning’s achievements as our model of excellence in reputation, in dependable international relations, in honest marketing, and integrity in doing business.